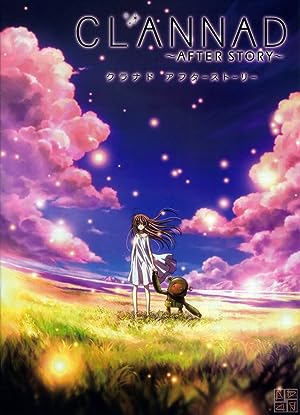 A sequel to the recently wrapped anime based on the Key Clannad franchise. After Story is a path that opens in the original visual novel after all the other paths have been opened. Life continues on for Tomoya. A few months have passed since he confessed his love to Nagisa. Now entering the second semester, he continues to meet a variety of different people, expanding his own world in the process. As well, Tomoya and Nagisa's relationship begins to enter a level of intimacy unlike before. Through his relationship with Nagisa, and his various encounters, Tomoya begins to understand the meaning and importance of family. Unfortunately, as Tomoya and Nagisa begin their own family together, they are faced with many hardships and challenges along the way. The sequel to the first anime, Clannad. After confessing his love for Nagisa Furukawa, life for Tomoya goes on. As he continues to meet and help more people with their own family problems, Tomoya's relationship with Nagisa grows to a greater level than ever before. Through his various encounters and the start of his new family with Nagisa, Tomoya will finally begin to understand the value of the most precious thing that we have in this world; the value of having a family.